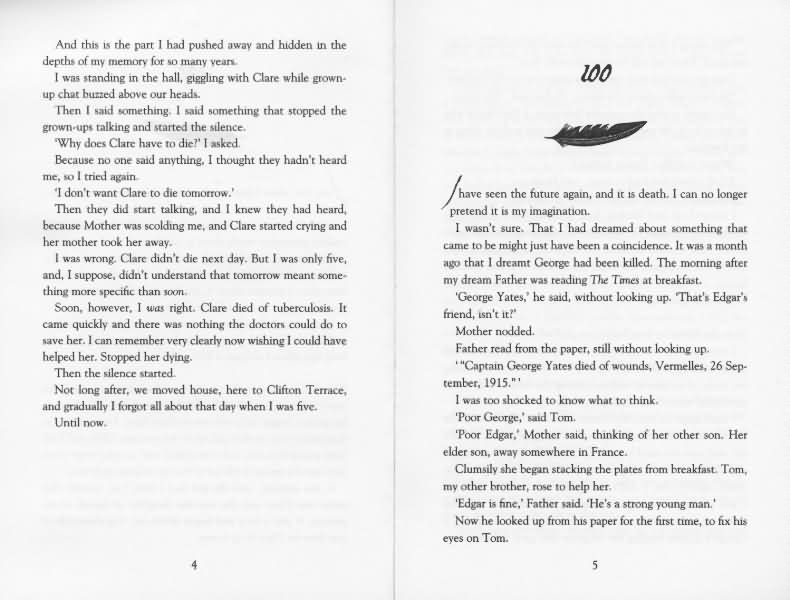 Log in to view theme keywords.
A girl realises that she can see the future and goes to France to try to save her brother, a soldier in the First World War.

A girl realises that she can see the future and goes to France to try to save her brother, a soldier in the First World War.

It is 1915. Seventeen-year-old Sasha Fox is the privileged only daughter of a respected doctor living in the wealthy seaside town of Brighton. But her brothers, Edgar and Tom, have gone to war and Sasha has a terrible gift. She can see the future.

Her premonitions show her untold horrors on the battlefields of the Somme, and worse still, what will happen to Edgar and Tom.

Like the prophetess Cassandra, who foretold the tragedies of Troy, Sasha is trapped by power. No one will believe her. Her family have lost faith in her. She is determined to win them back, whatever the price. And it is a high one - seeing the future is a fate almost too awful to contemplate - for who wants to see the end of their own story...?

Stylishly written in his familiar, poetic prose the story is that of a world full of threat and a child in jeopardy - but with a heroine resourceful enough to try to change the path of Fate.

NOTE : Sasha's elder brother dies in France, so she goes to France as a nurse to try to find her other brother. She finds him but he has decided he must stay to fight and as he walks away from her she shoots him, wounding him badly, so that he has to be sent back to England, where he makes a full recovery. His battalion meanwhile goes in battle and is virtually annihilated.

NOTE : The story starts at Chapter 101 and counts down to Chapter 1.