Ok
BACK TO NEWS 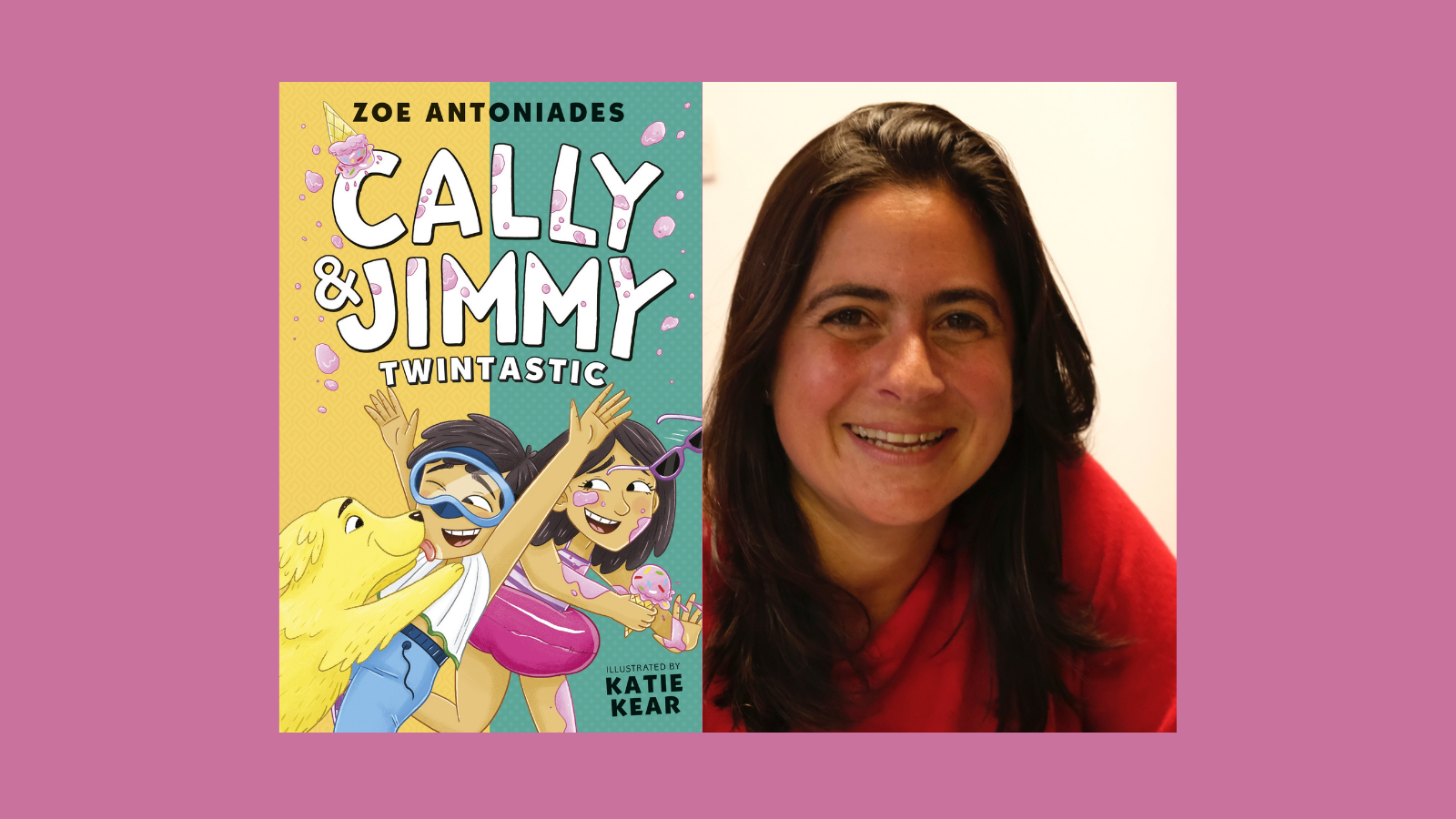 Q: Can you tell us a bit about your new book, Cally and Jimmy: Twintastic?

Cally has a twin brother Jimmy, and he is always getting into some kind of mischief - which usually means double trouble! Thankfully their Greek granny is usually on hand to help - or add to the mayhem!

There are four fun stories in the book, including the twins making a splash on their beach holiday in Cyprus, running into trouble on sports day, getting spooked while trick or treating, and uncovering a thief at school.

Twintastic is the second book in the Cally & Jimmy series, capturing the fun and chaos of family life. Yet these stories are heartwarming as much as they are hilarious. Narrated from Cally’s point of view, she often refers to her brother as ‘annoying’, but mostly these two siblings are to be found in cahoots and ultimately they are utterly twinseperable.

Q: Are the twins based on anyone you know?

The relationship between Cally and Jimmy connects with my memories of my brother and me from when we were younger. We weren’t twins, but we were very close in age (born eleven months apart) so we did everything together. We played and laughed a lot together – but there was a lot of sibling rivalry too. As my brother was the youngest, and very cute and very funny, I always felt he was the favourite and got all the attention. And he was boy. In those days, the older Greek generation tended to make more of a fuss over the boys and let them get away with more, so I was often a bit jealous of my brother. My brother was a lot gentler and calmer than Jimmy though.

There are aspects of Jimmy that are also inspired by my nephew Dominic who is a similar age. He is quite lively and really sporty like Jimmy. His older brother and big sister also describe him as annoying. I don’t think he’s that annoying really. It’s just a sibling thing, that you eventually grow up and out of.

Also, when I was a primary school teacher, many, many years ago, I taught a boy who had ADHD, like Jimmy. He was really fun and had a unique personality, and a twinkle in his eye too. I often think of him and picture him in my old classroom when I am writing about Jimmy.

Q: How important was it for you to feature a neurodivergent central character?

I wanted there to be a big difference between Cally and Jimmy so as to set the characters apart from one another even though they are twins. I also wanted there to be something about Jimmy that meant he would get the most attention and so made Cally think that he was Yiayia’s and everybody else’s favourite. In the old days, it would have been enough that Jimmy was a boy to have made him more the centre of attention, as I said before, in those days, the older Greek generation tended to make more of a fuss over the boys. But times have moved on and that is not so relevant today. Jimmy having ADHD means that he does need more time and attention from the grown-ups as he can be quite reckless so he needs to be kept an eye on more. He also finds it hard to concentrate at school so he has a teaching assistant, Miss Loretta, to help him with his work and to manage his behaviour. But just because Jimmy finds some aspects of schoolwork difficult, whilst Cally is on the ‘top table’, it doesn’t mean that Jimmy is not clever or good at things too.  I didn’t set out to specifically write a book about a neurodivergent character, it’s just that this is the thing that sets Jimmy apart from Cally. I imagine twins get compared to one another a lot and I wanted to show that everyone is unique. Both Cally and Jimmy have their challenges and their strengths. Neither one is better or worse than the other. Although I suspect Jimmy might be more popular with our readers, because he is certainly the funnier and more fun-loving one.

Q: Was it important for you to bring Greek culture into the stories?

It made sense to do so as we often draw from our own experiences when writing, and my parents are from Cyprus, although I was born in London as were Cally and Jimmy. I am proud of my Greek heritage and it has been meaningful to incorporate it into the stories of Cally & Jimmy. I have also really enjoyed writing the Yiayia character. However, the Greek culture is only part of the fabric of Cally and Jimmy’s world, as they have an English dad and are living in London which is a multicultural city so they have a richly diverse community of people around them.

Q: What has been the most enjoyable part about writing the Cally and Jimmy stories?

I’ve enjoyed the process of the writing, developing the characters and building a relationship with them that has grown so much over time that I feel as if they are almost part of my own family now. I love it when I am so immersed in the writing that the ideas start coming out of nowhere, as if by magic, as if Cally and Jimmy are taking on a real life of their own and running the story themselves.

I’ve also found it brilliant working with my editor Charlie Sheppard who knows how to get the best out of me and who has always helped to make the books as good as they can be. I have learnt a lot from her and developed much more as a writer because of it.

But the most enjoyable part of it all is when the books are published and I get to share them with an audience. I love reading them out loud to children in schools or at festivals and events and seeing their smiling faces and hearing their laughter, or just watching them sitting there captivated by the world of the story. Books would be nothing without an audience to take them on and believe in their worlds, and when they do, it is so rewarding. It makes me so happy to feel that I am contributing towards bringing joy, entertainment and a love of books to the next generation.

Q: Do you have a favourite scene in the new book?

I like the scene in the Halloween story where Yiayia is telling the children all about the weird and quirky old-lady superstitions they have in Greece and Cyprus, such as checking to see if you’ve got the curse of the evil eye on you. I think she secretly enjoys winding the children up here as they fall for her funny tricks which get more and more bonkers as they go along.

The scene on the aeroplane and at the arrivals room when they go to Cyprus is funny too. Jimmy is especially silly on the plane, much to Cally’s annoyance, and then when they go to collect their suitcases he causes havoc on the luggage carousel. It made my nephew Dominic laugh when I read it to him and I like the scenes that make other people laugh.

Q: These books are packed with amazing illustrations by Katie Kear – what is it like to have an illustrator bring your characters to life after you’ve written them?

Katie Kear is most definitely amazing. Every time I look at the books I think to myself how lucky I am that our colleagues at Andersen Press found her and asked her to be the illustrator of Cally and Jimmy. I love it when I get to see her illustrations for the first time, and in fact every time I look at them again afterwards. They just make my heart sing with joy and laughter. They take the stories to a whole extra dimension and certainly bring out the humour (and add to it) and the characters. There is so much energy and action in her drawings. Sometimes I send Katie a photograph or note or two for inspiration, but mostly she just really thoughtfully reads the text and seems to completely get everything about it. Her illustrations are so true to the life of the book. I wonder if she does some extra research of her own too, because I was especially impressed with the illustrations for the story set in Cyprus. The landscape, even the smallest detail in the background was so realistic – like when stepping off the plane, it was just as I know Larnaca Airport to be, or the stone walls and the dusty ground of the yard at their cousin’s house. And the characters. Their expressions. Absolutely brilliant. What Katie can do just by drawing an eyebrow in a certain position. Genius. I love, love, love looking at Katie’s illustrations over and over again.

Q: What’s next for Cally and Jimmy? Can you give us a sneak peek of what to expect in the next book?

Now that would be telling! Ok, but no spoiler alerts. I’ve just completed the first draft. Another four fun adventures. Cally and Jimmy cause havoc when they get to bring Year Five’s pet hamster home for half term; they have a surprise snow day when staying at Dad’s in Clapham which is very exciting; they get enterprising for the school’s charity fundraiser by holding a yard sale where Jimmy gets to sell practically everything but the kitchen sink; and they experience a hair-raising roller-coaster ride on a day at the theme park.

Q: And finally, what was your favourite book when you were growing up? And is there a recent children’s book, apart from your own, that you think everyone should be reading?

As a child I particularly loved two kinds of books. Those books that took you to magical worlds, such as fairy tales by the Brothers Grimm and especially books with portals as in the Magic Faraway Tree by Enid Blyton and The Lion the Witch and the Wardrobe by C S Lewis. And I liked funny books too: anything by Roald Dahl, especially The Twits. Also I had a book of poems by Spike Milligan which I loved.

Recently I have read After the War by Tom Palmer and The Midnight Guardians by Ross Montgomery – both of which I’d highly recommend to young readers today, and I am looking forward to reading When the Sky Falls by Phil Earle. When I am in the mood for a bit of fantasy and folklore along with some beautiful lyrical writing, I often turn to the books of Kiran Millwood Hargrave too.

Cally and Jimmy: Twintastic is out now